According to ODOT, fatal crashes involving pedestrians and roadway departures both hit their highest levels in 2021 when compared to the previous decade.

"This is a serious problem, and we certainly believe that distracted driving is contributing to this alarming increase in pedestrian-involved and roadway departure crashes," said Governor DeWine. "The funding we're awarding today, most of which is going to local governments, will be used to make the physical changes needed to help prevent crashes, but a cultural change around distracted driving is needed as well. I continue to encourage members of the Ohio General Assembly to pass legislation to put more restrictions around mobile device usage while driving to make it clear that distracted driving won't be tolerated in Ohio."

The $51 million in funding will go toward 44 roadway safety projects in 32 counties. Nearly $30 million, or 58 percent, will be awarded to local governments in municipalities, townships, and counties for projects under their jurisdictions. The remaining funds will be used for projects on ODOT-maintained roads and highways.

"Governor DeWine has always challenged us to be bold and creative as we work to address the rise in traffic-related fatalities. I believe this is both. A goal we share with our partners in local government is significantly reducing deaths on Ohio roads, so we must work together to get there," said ODOT Director Jack Marchbanks. 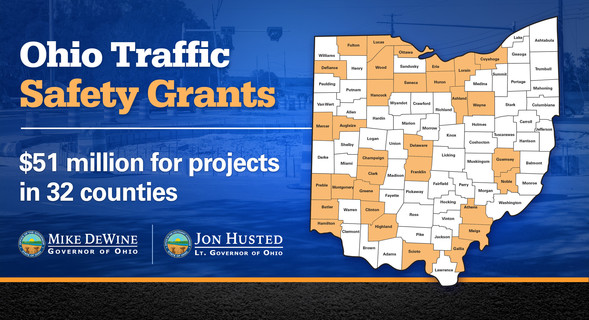 Of the total funds, ODOT will invest $25.6 million into roadway-departure prevention projects such as widening roadway shoulders, installing center and edge-line rumble strips, and modifying ditches and culverts. Incidents of drivers leaving the travel lane and sideswiping another vehicle, hitting an oncoming vehicle, or colliding with an object on the side of the road typically cause more than half of all traffic deaths and nearly half of all serious traffic injuries in Ohio each year. In 2021, 703 people were killed and 3,390 people were seriously hurt in roadway departure crashes.

Because crashes involving pedestrians are more common on roadways that lack dedicated infrastructure such as sidewalks, paths, and marked crossings, ODOT will invest the remaining $25.5 million in pedestrian projects like sidewalks, high-visibility pedestrian crossings, and road "diets" which reduce the number and width of traffic lanes to prompt drivers to slow down. According to ODOT, 176 pedestrians were killed in traffic crashes last year, accounting for 13 percent of all traffic deaths in the state. Another 530 people were seriously injured.

Construction timelines vary for each project; some projects may begin as soon as this year.

Funding for these projects will be awarded through ODOT's Highway Safety Improvement Program which, under the DeWine-Husted Administration, has grown to become one of the largest traffic safety programs in the country. The program invests $158 million annually into safety projects, education, and training to make transportation in Ohio safer.

These grants are another step in Governor DeWine's comprehensive plan to improve the safety of Ohio's roads.  In 2019, he directed ODOT to put focus on improving 150 of the most dangerous intersections in the state. Earlier this year he partnered with Kentucky to jointly pursue up to $2 billion in federal funding to address traffic backups and safety issues on the Brent Spence Bridge. He also announced an increase in Ohio's yearly funding allocation for local bridge projects by $47.5 million for the next five years.