"Crime can destroy lives, make our communities unlivable, and shatter all our dreams for the future. Every child deserves a safe neighborhood to grow up in," said Governor DeWine. "These budget proposals are focused on assisting local law enforcement in their work to catch criminals, prevent crime, and save lives."

A total of $10 million over the biennium would fund a grant program to help local law enforcement agencies outfit more officers with body cameras across the state.

“The public has more trust in the criminal justice system when officers are wearing body cameras. They encourage transparency and can help ensure accountability,” said Governor DeWine. “My goal is that most, if not all, law enforcement agencies in the state will establish a body-camera program with the help of this grant funding.”

The use of body cameras is not mandated in Ohio. It is estimated that up to two-thirds of all law enforcement agencies in the state, primarily Ohio's smaller agencies, do not outfit their officers with cameras due to equipment and video storage costs.

If approved by the General Assembly, the Body-Worn Camera Grant Program would prioritize funding for agencies that do not have a body-camera program. Agencies with established programs would also be eligible. The grants would be flexible to meet agencies’ individual needs and could be used toward expenses such as camera equipment, video storage, and public record management personnel. Funding would be contingent on adherence to the Ohio Community-Police Collaborative's body-worn camera standard.

Governor DeWine created the ONIC in 2019 with a $6.5 million investment from the Ohio General Assembly in the previous operating budget. ONIC criminal intelligence analysts and computer forensic specialists at offices in Cleveland and Columbus assist local authorities in unraveling complex drug trafficking investigations through analysis of cell phones and other electronics.

"There is a world of evidence inside these phones, and the extraction technology at the ONIC is second to none and not widely available anywhere else in Ohio," said Governor DeWine. "Our team can turn around a complete analysis of a cell phone for local law enforcement in a matter of days."

The added investment of another $6.5 million would allow the ONIC to:

Create a program to assist local investigators in gathering intelligence from cell phones seized in fatal overdose cases that have not yet been analyzed for investigative leads on the supplier. 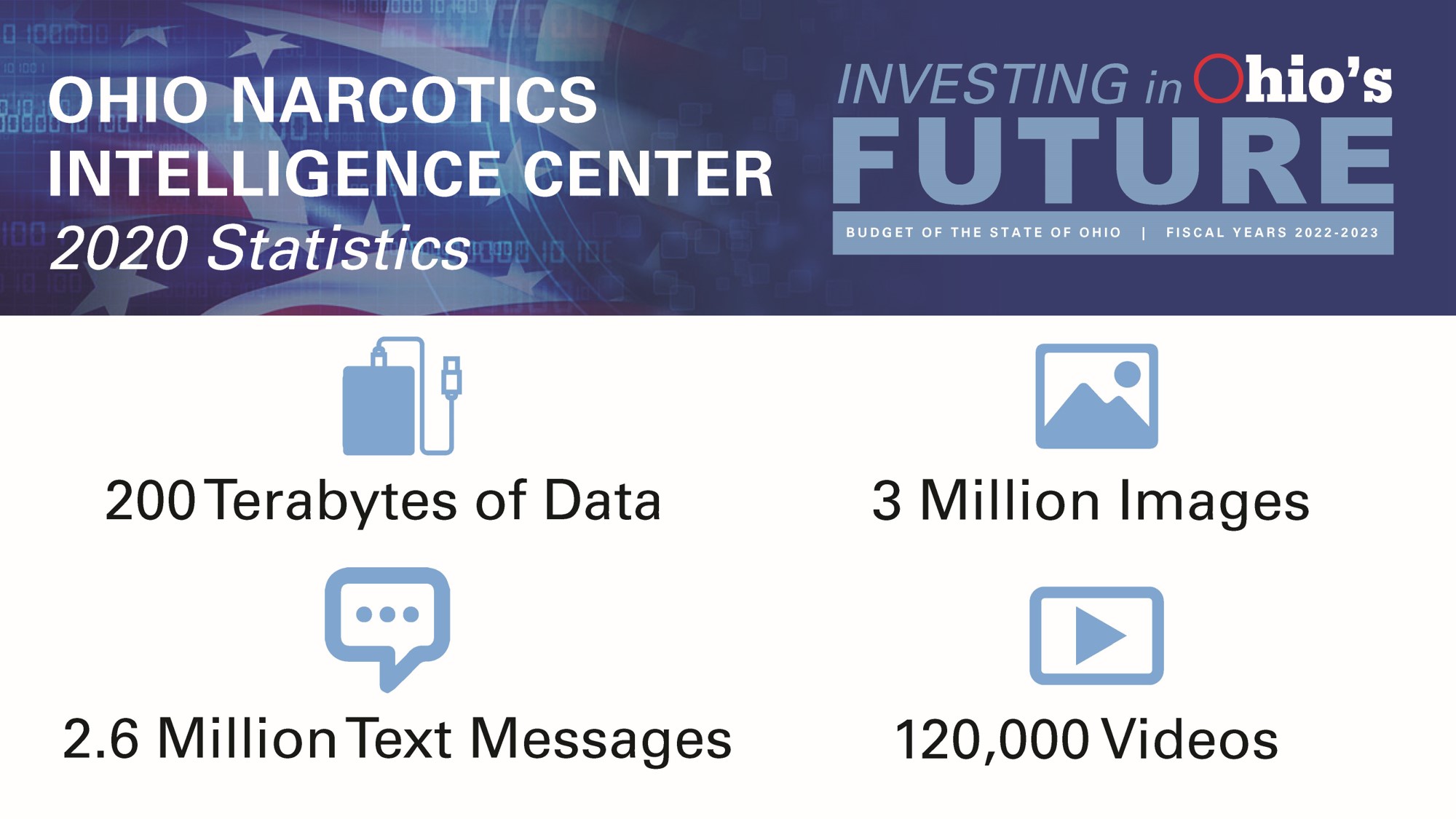 A total of $8 million over the biennium would be allotted to a new grant program to assist local law enforcement in implementing new violence reduction strategies to prevent and solve crimes.

This grant funding could also be used by local law enforcement agencies toward other violence reduction programs such as gunshot detection technology and community initiatives to reduce violence.

Governor DeWine’s Executive Budget proposal invests $4.6 million over the biennium into the Ohio School Safety Center (OSSC) which was created in 2019 with existing resources within the Ohio Department of Public Safety.

“Our school safety team has done great work over the past year, but with limited resources, they’re only scratching at the surface of what they could do,” said Governor DeWine. “Nothing is more important than the safety of our children, and by expanding the work of the Ohio School Safety Center, we can provide more localized, immediate support to schools, as well as expand the training, research, and intelligence-gathering services the center provides.”

Funding would assist the OSSC in handling the influx of new schools expected to register with the Safer Ohio School Safety Tip Line in response to the passage of House Bill 123, which mandates that all Ohio schools offer students access to an anonymous reporting system. In 2020, the OSSC increased the visibility and enrollment of the Safer Ohio School Safety Tip Line (844-723-3764) and fielded calls about student mental health concerns amid the pandemic.

Over the past year, OSSC also reviewed thousands of school emergency management plans as assisted administrators in incorporating pandemic response procedures into their emergency response plans. The OSSC's K-12 threat scanning program identified more than 8 million public social media posts related to Ohio’s schools and used artificial intelligence to pinpoint posts indicative of unsafe, suspicious, or harmful activity. The scans resulted in approximately 1,100 alerts that were researched and analyzed by the OSSC team. Actionable information, such as bomb threats and threats of physical harm, was then funneled back to local officials for intervention.

The Executive Budget proposal also invests a total of $1 million over the biennium into the Ohio Governor’s Expedited Pardon Project. The project, which operates with the help of the law clinics at The Ohio State University and the University of Akron, puts certain rehabilitated citizens on a fast-track to be considered for a Governor’s Pardon.

It is estimated that thousands of Ohioans could qualify to participate in the project, and funding would be used to help expand the initiative into law clinics in other parts of the state. Language in the budget would also allow those who have been pardoned to seal their records.

The Ohio General Assembly funded the following initiatives in the previous biennium budget. Governor DeWine proposes that the funding is continued.

The proposed Executive Budget "blue book," including Governor DeWine's full budget recommendations and budget highlights, can be found on budget.ohio.gov.