Construction on the Fayette County battery plant is expected to begin in early 2023, with a goal of starting mass production of advanced lithium-ion battery modules by 2025. The site, at Interstate 71 and U.S. Route 35, offers more than 1,500 acres and is less than an hour's drive from Columbus, Dayton, Cincinnati, and Chillicothe. It also includes access to utilities, including water, sewer, electricity, and natural gas.

Honda has a legacy of choosing Ohio for trailblazing initiatives. In addition to choosing Ohio for its motorcycle plant on October 11, 1977, the Marysville Auto Plant produced the very first Honda Accord on November 1, 1982, and the Anna Engine Plant, which opened in 1985, now produces more than 1 million four-cylinder, V-6, and turbo engines for Honda auto plants throughout North America. The East Liberty Auto Plant opened in 1989 and has manufactured over 4.5 million Honda and Acura vehicles since its inception. In 1992, Honda opened a major product development center in Raymond, Ohio, that now creates many of the vehicles built in Ohio.

“Honda is proud of our history in Ohio, where our U.S. manufacturing operations began more than four decades ago. Now, as we expand Honda’s partnership with Ohio, we are investing in a workforce that will create the power source for our future Honda and Acura electric vehicles,” said Bob Nelson, executive vice president of American Honda Motor Co., Inc. “We want to thank the leaders of the state of Ohio, as well as in Fayette County, Jefferson Township, Jeffersonville, and Washington Court House for welcoming this new joint venture between Honda and LG Energy Solution and giving us another Ohio community to call home.”

Last month, both companies announced an agreement to establish a new joint venture company to produce lithium-ion batteries in the U.S. to power Honda and Acura EV models. The pouch-type batteries produced at the new plant will be supplied to Honda facilities. The plant aims to support Honda’s target of making battery-electric and fuel-cell electric vehicles 100 percent of its vehicle sales by 2040.

“In another major step toward electrification, LG Energy Solution’s innovative battery technologies will not only power Honda’s brand-new EV models but support Ohio’s green economy. We extend our gratitude to everyone who played a role in making this happen,” said Dong-Myung Kim, Executive Vice President of Advanced Automotive Battery Division at LG Energy Solution. “With our commitment to building the world-best quality products, together with Honda, we look forward to not only creating thousands of quality jobs here in Ohio but growing together with the community.”

American Honda Motor Co., Inc., LG Energy Solution, the DeWine-Husted Administration,  JobsOhio, the Dayton Development Coalition, One Columbus, and other state, county, and local officials and partners all collaborated to bring the project to Fayette County.

“Honda’s new commitment comes after 45 years of collaboration, growth, and success, shaping generational opportunity and investment for Ohioans,” said J.P. Nauseef, JobsOhio president and CEO. “Honda and Ohio have partnered to strengthen its current manufacturing while transitioning, together, to build the vehicles of the future.”

AccelerateOhio is also shaping the future as a collaborative effort between the state of Ohio, JobsOhio, and 15 public and private organizations to create an innovation ecosystem for the advanced mobility sector – including automotive, aviation, aerospace, and military industries.

To support the expansion of these investments, the Ohio Tax Credit Authority will consider a tax credit at a future meeting, and JobsOhio also plans to provide grant assistance. The Administration also plans to work with the General Assembly to secure state funding for local water and transportation infrastructure. Start of construction is pending local approvals. 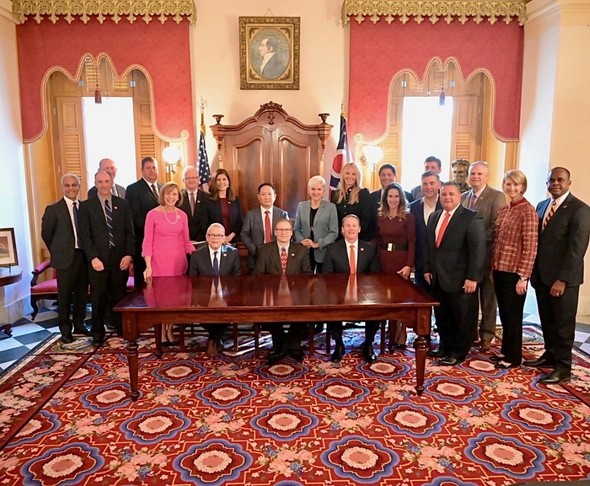 Photo of state and local leadership with Honda and LG Energy Solution taken on October 11, 2022, in the same location as the 1977 photo below. 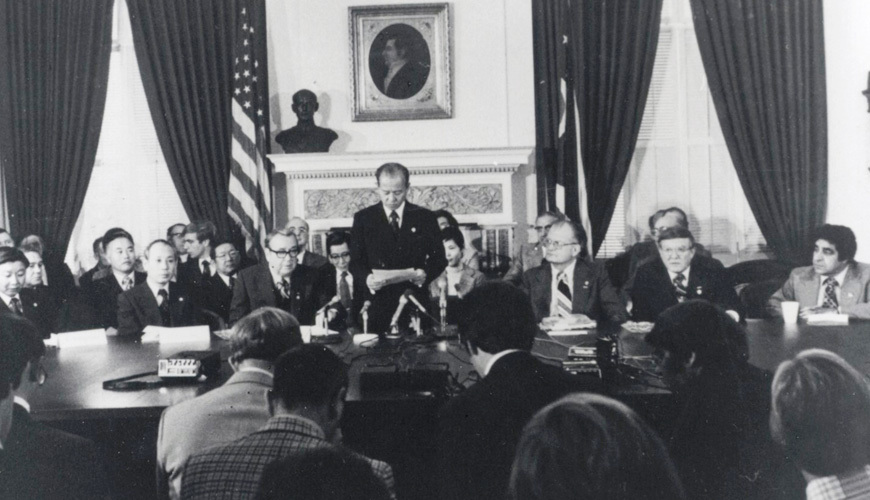 ​On October 11, 1977, plans were announced at the Ohio Statehouse to construct a $35 million motorcycle plant in Marysville, Ohio. (Photo Credit: Honda)